When you work in the IT sector, keeping up with technology trends and market movements is as important as breathing.

A surprising stat chart took birth before our very eyes. In our list of trending technologies, searches on Bitcoin and blockchain took a sweeping obvious lead over our list of all other technology related searches. We created an accompanying pie chart for a more clear representation of the volume distribution. 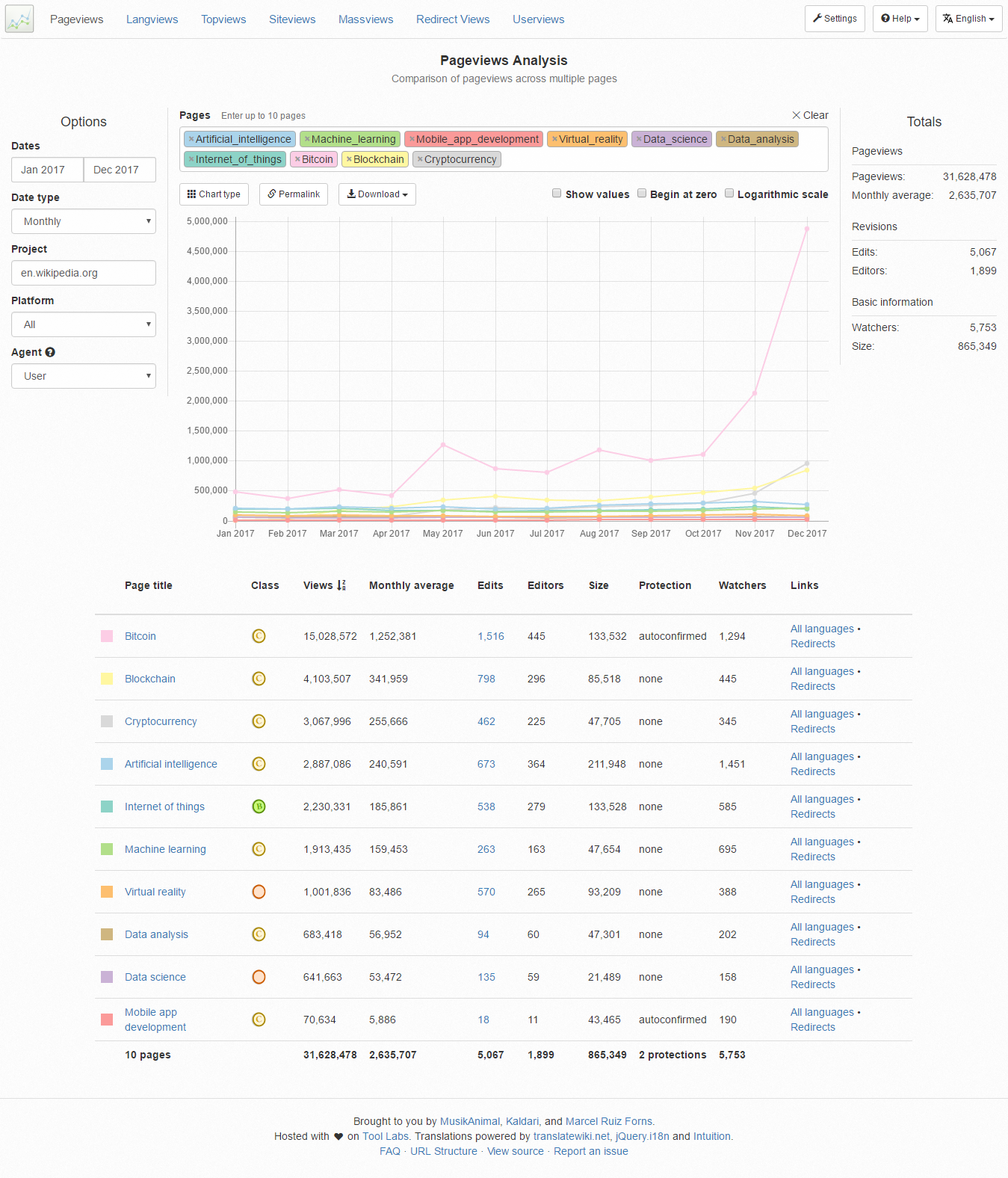 Looking at the Bitcoin statistics, the graph shows closely followed fluctuations in search volumes but after November the search volumes spike exponentially from a value of 2,123,997 views to almost twice the volume of 4,872,179 views. In the full year of 2017, 3,067,996 people searched for crypto currency and 4,103,507 people searched for Blockchain. Both terms, relating to Bitcoin.

What could be the possible reason for that?

Let me first tell you what the three of these are and how do they relate to each other. According to Wikipedia, Blockchain (among other things) is a technology that allows different types of cryptocurrencies to work and exist as digital currency. Bitcoin is one of the most famous type of cryptocurrencies out there on the internet known for enabling secure and private transactions. Blockchain technology was specifically invented for Bitcoin. And a cryptocurrency is a medium of exchange, just like the US dollar, but it is digital and utilizes different encryption techniques and methods to control the creation of monetary units and also to verify and secure the transfer of funds.

Now what justifies the huge volume of searches?

Two things, The growing public awareness of Bitcoin, and its value, and the comparatively silent performance of other digital currencies recently. The author of “Cryptoassets: The Innovative Investor’s Guide to Bitcoin and Beyond,” Chris Burniske, highlighted, that “The secular bull trend continues.” (bull being referred to as Bitcoin)

Many analysts associate Bitcoin’s growth in this year to a surge of interest from institutional investors, who are wagering on Bitcoin, as a store of value or a means of payment as the future digital currency.

The growth in the number of “digital wallets” on a major wallet company, Blockchain.info, has also doubled from about 9.2 million to 17.5 million on and seems to be on a continuous growth path.

Another reason why there is a lot of buzz around cryptocurrencies presently, is the increase in the number of companies talking about this technology and even adopting it as a business currency.

Square is one such example. The payments processing organization now allows buying and selling Bitcoin through their Square Cash feature.

No matter the growing use of Bitcoin throughout the financial sector, it seems growing public awareness is the main reason driving the surge in price.

According to analysis driven from CoinDesk statistics, this digital currency now has a market capitalization of more than $90 billion. Currently, the cryptocurrency is up 800% as supposed to the value in the beginning of the year, which was $968 per coin. Presently it’s a few dollars shy of $10,000 per coin.

The cryptocurrency passed the $9,000 mark over the weekend and could reach $10,000 before the end of the month.

That feels more than enough for justifying why so many people search for Bitcoin and related terms in such huge volumes. Everyone loves a good earning opportunity!

Lets look at some of the key highlights of the year 2017 for AI.

Machine Learning also follows in closely with a figure of 1,913,435 views.

Such a huge dwindling difference in number of views does not, in any way, reflect the importance or growth of these industries. Bitcoin just seems to be on everyone’s mind because of the obvious “potential of earning appeal to it.” Advancements in Artificial Intelligence are unknown to none. AI is not only advancing and evolving but it’s growing into every technology related field.

The least viewed Mobile app development industry is progressing like a cancer. Talk about artificially intelligent apps, Interactive user designs and interfaces, smart assistants, virtual reality mobile games and what not, these statistics mere suggest what people have been searching around and for some niches, Wikipedia may not be the right information platform.

Some of the biggest giants in the IT industry are working on tech areas people least searched for.

The need for more secure data is growing day by day as we dive deeper into cloud related technologies. Of course with that comes, Data analytics, which is already playing a huge role in cloud computing.

“Data is useless if it is not efficiently analyzed and turned into insights”.

According to the Page View analysis, we found that a total of 2,635,707 average monthly searches are done by people for technology related pages on Wikipedia.