Know what’s what first: Python is a programming language while Node.js is an environment that allows JavaScript code to run on the server side.

Node.js jumped to the front lines because it allowed the same language, JavaScript, to be used for both frontend and backend applications. A revolution that reduced a lot of compatibility issues between server-side and client-side programming and frustration of developers in fixing those problems.

Python, on the other hand, is way older and mature. Python is a titan in itself if I must say so. A general-purpose language with strengths in professional backend web development and data analysis, both, Python and Node.js, are excellent and amazing in their fields of use, but what are the key differences between Python and Node?

Node.js is based on Chrome’s V8 engine, a virtual machine Just-In-Time compiler of chrome, which makes things very fast. Higher speed = Higher Performance. This makes Node.js your number 1 choice for building real-time web apps such as chat apps or functional ones like a live stock-exchange platform, then Python.

Python has its PyPy compiler, but it doesn’t make Python as fast as Node.js. Python is slow initially, and it doesn’t abide well with memory-intensive apps such as apps with high graphics.

2: Node employs scalability as a standard

Node allows the creation of single thread asynchronous structure with I/O operations. Since the completion of I/O operations happens outside of the thread, there is no chance of blockage. This is the very trademark of Node.js that allows smooth scalability in web apps. It does get a little tricky with complex web apps, but a little in-depth knowledge never hurt anyone, right?

Python, however, does not support asynchronous programming style by default. It’s not that much of a bummer because you do have coroutines in there which can be used to get the same results as asynchronous processing.

Error handling is one of Python’s strong suites. It takes a lot less time to fix and debug errors in Python as compared to Node.js. Using Python, you get great maintainability, solve errors in less time and debug quicker than Node.js.

Why is that? Because the Node environment runs solely on JavaScript. A vast majority of programmers work with or are at the very least familiar with JavaScript. So shifting over to Node.js is quite easier than moving over to Python.

This also becomes really handy when working in teams. Most of the team members usually have some understanding of JavaScript. Intercommunications between developers become very smooth and more fruitful as front and backend developers can look over Node code and better understanding what’s happening. The added perk, working with API endpoints or handling views is a walk in the park.

However, if you are the exception who is unfamiliar with JavaScript, this might not hold true in your case. Python has a very clean and lean code syntax. You could get the same task done in few lines of code in Python than in Node.js

Our takeaway, Node.js is easier to learn IF you are a familiar with JavaScript. Otherwise, Python wins the trophy for an easier learning curve.

Python has a richer set of standard libraries. You don’t have to fish around the internet for 3rd-party libraries like you would when working with Node.js. Trust me that takes up a lot of time if you don’t know what you’re looking for or get lost in the choice of options. 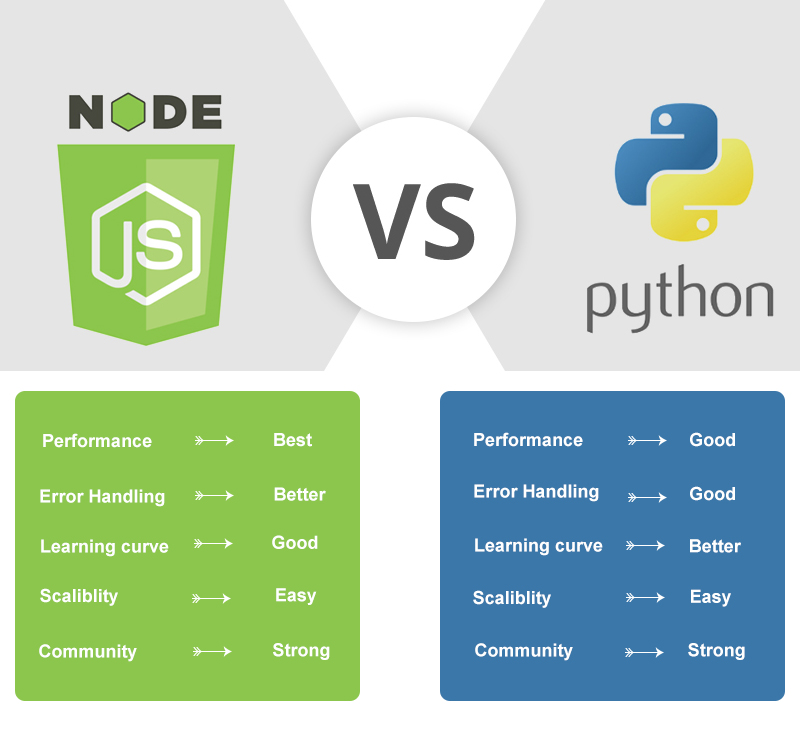 There are other differences between Python and Node.js, but the aforementioned are my top favourites. As one honourable mention, Node.js handles imports better then Python and you are less worried about circular imports in Node. I am mentioning it here because tightly coupled code reduces a paramount of code reusability. You could work around this in Python, but then who likes to make the extra effort when there are easier alternatives present?

This article aims just to point out the differences in Node.js and Python, not prioritise one over the other.

We all know (and by that, I mean sensible programmers) that you choose a language or a framework based on the requirements and your need.

There are great companies, which were once startups, using Python such as coursera, Udacity, Spotify and so much more and the same goes for Node.js. Some of the organisations using Node framework include LinkedIn, Medium, eBay. If you are also a young startup sifting through what to best use for your development processes check out my article on Citrusbits  Python vs Node.js to help make a better and informed decision.