Will Google’s ARCore be the bridge between our world and the digital world?

Google released ARCore developer preview 2 recently, near Dec’17, promising it will break barriers with augmented reality on Android phones. How is this AR venture any different to Tango, Google’s first augmented reality platform? Because as of March ’18, Google announced they would be ending support for Tango.

Could the same happen to ARcore? Why or why not? Before we talk about that, it will be helpful if we truly understand what augmented reality and ARCore really is.

Augmented Reality, AR is a technology that allows you to place a digital object in the user’s view of the real world. By using a camera, you get a combined view of the digital and the real world, more appropriately termed as ‘Enhanced reality’. 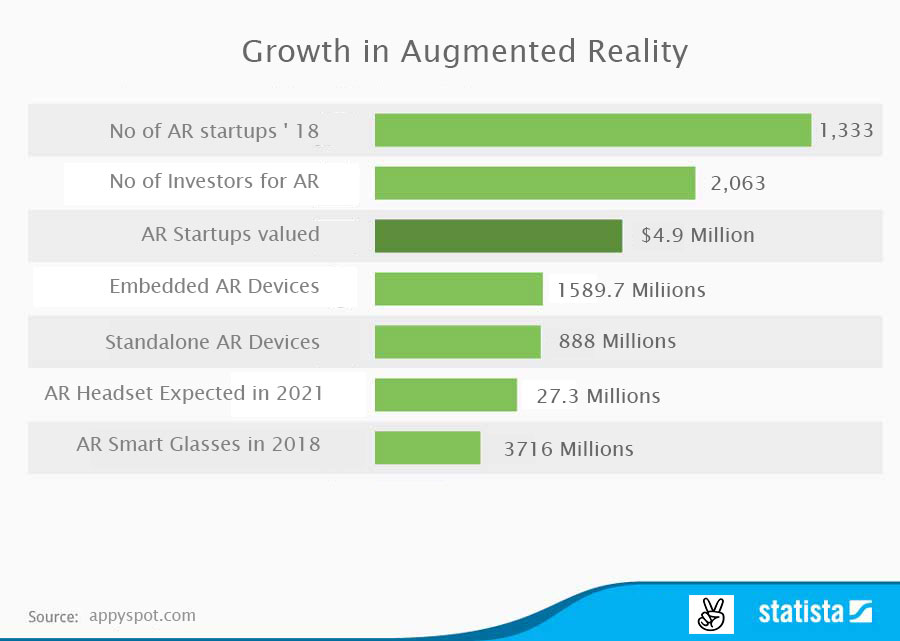 AR is mostly mixed with Virtual Reality. Augmented Reality is quite different.

Now that we know what augmented reality is, how do you create AR apps? One of the ways is by using an AR SDK for that. An SDK is a software development kit. It contains the necessary tools required to create a desired app for a targeted platform. Google’s ARCore is just the right example for that.

ARCore is an Android software development kit (SDK) that brings augmented reality to Android smartphones without any additional hardware requirements.

In simple words, ARCore is meant to enable us to interact with digital content in a physical way.

CLAY BAVOR, VP Virtual and Augmented reality, said in the Google I/O ’17, that Augmented Reality is important because it enables us to experience computing more like we experience the world.

HOW DOES ARCORE WORK

I know the moment you hear augmented reality, it takes you to a futuristic world, full of high tech robots and a star wars theme universe but how does it actually work? You are not alone if that question bothers you.

Simple answer to that, ARCore tracks the position of your mobile device as you move with it and builds its own understanding of the world around it.

It uses three key features to do it.

Environmental detection – ARCore understands the environment by looking at collective feature points lying on a single horizontal surface. Feature points are visually distinct features in an image the camera captures. Meaning, it looks for flat surfaces and other recognizable features and makes them available to your app as ‘PLANES’. Like that of a table top or a chair.

ARCore not only recognizes a flat surface, but also the boundary and dimensions. You can place AR objects on it without any glitches or unrealistic positioning.

Motion tracking – ARCore understands the phone’s relative position to the world by using a process called COM, concurrent odometery and mapping. This is what allows ARCore to render virtual objects with the right perspective and position.

So when you put an AR tree on top of a table, It won’t appear half on top and half through the bottom. You can overlay virtual objects on top of real world objects as if they are actually there. Even when you move around, the object’s position is not disturbed. Turn off your phone and come back later, you will still find that little cat right where you left it on the carpet – This is Augmented Reality at its best.

Lighting – ARCore enhances the reality of virtual objects by processing light intensity. Whatever the lighting condition in the environment, it applies and adapts to the same level. Thus, the virtual objects created have proper shadows and react to different light settings.

Watch the cowardly lion getting afraid when you turn of the lights.

Because of these features, apps developed with ARCore are interactive, responsive and fun. Know how to develop apps with ARCore?

You can choose your choice of development environment from Unity, Unreal, or Java/C . Before you think about the development, know how to download ARCore.

HOW WAS ARCORE DEVELOPED?

Whatever reason Project Tango was intended for, it ended as the cornerstone for ARCore.

Tango was Google’s first take on augmented reality. It was also an AR platform but it died off pretty soon.

The Tango project was created by the ATAP group at Google. As compared to the team behind ARCore, ATAP is a smaller team with comparatively less resources. So Tango lacked some vision in the start.

But the main reason why Tango got shut down is because it required special hardware, two sets of cameras, one to sense the depth and a 3D camera. This limited Tango to two devices (mainly), the Phab 2 Pro Lenovo and Asus Zenfone AR, and that of course was a problem.

Tango was powerful but not portable to every device, ARCore is less powerful but on its way to be available to a 100 million android devices.

ARCore skyrocketed because it is independent of such hardware requirements and it was created in collaboration between two giant teams, the Android Team and the VR group. They built ARcore on learning schematics from Tango. Suffice to say, Tango project did not die in vain.

The motion and environment sensing features are the result of Tango project but the light sensing feature is new. From how things are looking at this point, ARCore is here to stay and seems to be the only answer to Apple’s ARkit. 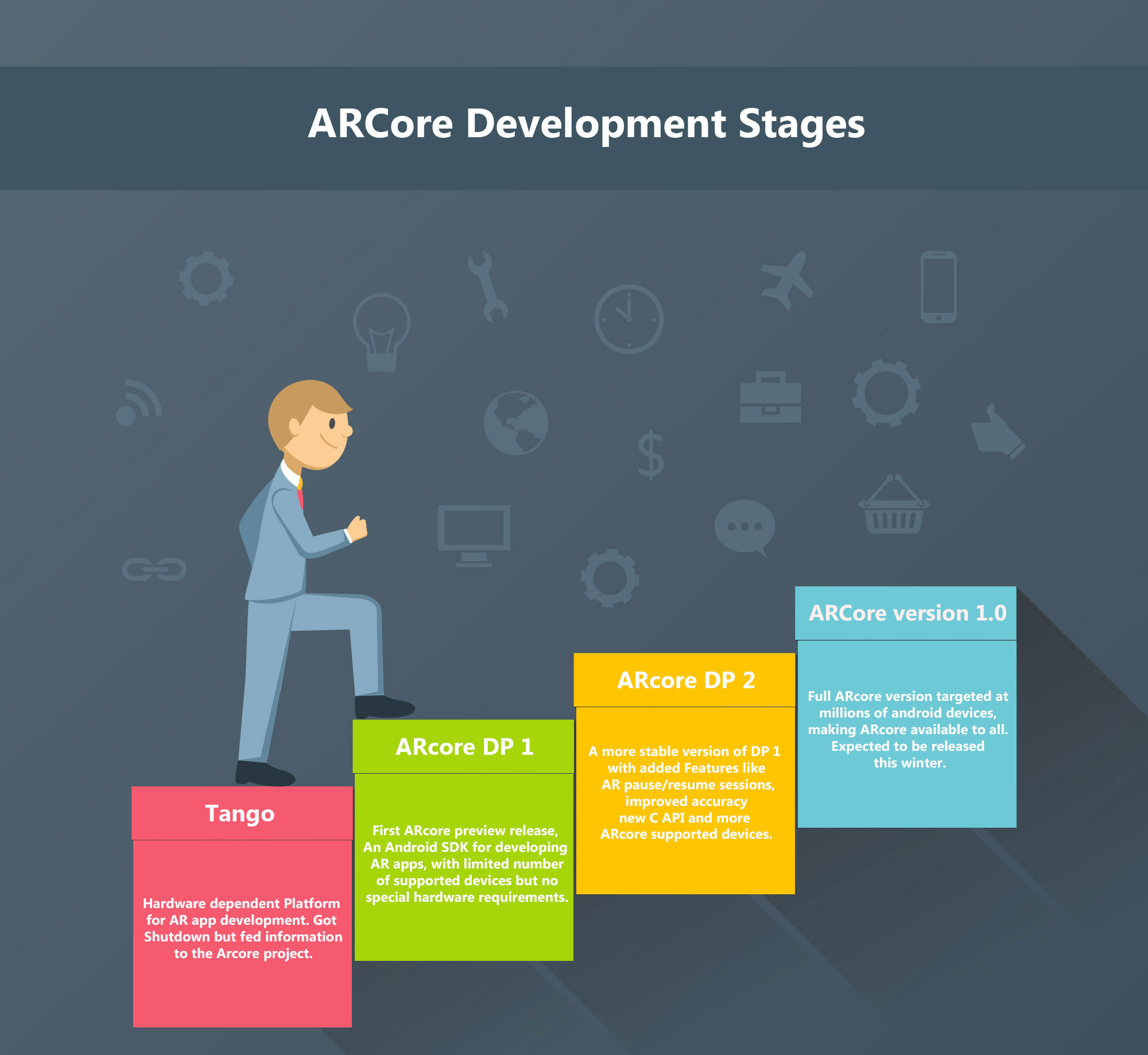 ARCore supported devices is not a long list. At present, Google recommended ARCore devices are

Although any smartphone with internal sensors and the latest Android version should be able to utilize Google ARCore services but specifically, devices having an Android Version lower than nougat 7.0 will not be able to use ARCore services. ARCore requires device hardware like accelerometer, gyroscope (gyro) sensor and a proximity sensor with a minimum Octa-core processor or a Quad-core processor to map and understand the environment.

It also requires a good camera, preferably 12 mp or more, to better see the world. Devices having lower specs will not be able to run ARCore services on their phones. Even if you have rooted your device as a Google Pixel or a Samsung (latest versions), and your device is missing on these hardware requirements, ARCore will simply crash.

A fair warning, since ARCore is still in the preview stage, there are chances that you might encounter some bugs and abnormal behavior even on the recommended list of devices.

The situation will not remain the same for long because Google is working in collaboration with other mobile companies like Huawei, Samsung, LG, Asus and more to bring ARCore to a million Android devices so everyone can use services of ARCore.

APPS THAT USE ARCORE

So, who would like to experiment with AR and develop something cool? Who knows, you might even get featured by Google. Check out these apps for inspiration.

Based on your location, you can take pictures with a real gnome by your side. You can choose from 250,000 unique Gnomes. That’s a lot of different pictures you can take!

No matter how fun, AR is equally empowering at educational experiences. Sahi Labs is an AR based science laboratory. Interact with different apparatuses, conduct experiments and understand scientific concepts that you didn’t understand in class.

Well, who wouldn’t love a dead pet come back to life? Play with Bydo, your ghostly pet in augmented reality. Place the soul vessel in a well lit room and then dim or turn off the lights to make him appear.

Create your dream car with this ARCore car app. This is also made with Unity3D.

PortalAR is an immersive way to explore 360 photos, videos and 3D environments. Unlike Benedict Cumberbatch, who learned opening portals the hard way, you can do it with your smartphone with this AR app.

You can check out more ARCore apps here

ARCore is here to lead where Tango failed. Created by Google’s two great teams, there is no doubt that it will be one hell of a competitor to all augmented reality platforms out there.